How to identify contamination in mushroom growing

When learning to grow mushrooms you're almost guaranteed to encounter some other fungi in the form of moulds. Moulds are the biggest competitor to the mushroom grower. How do you identify it and what do you do when you find it?
Updated on January 5, 2021

Unfortunately the ideal growing conditions for mushrooms are also inviting to other fungi, including moulds - yuck!

Below we'll outline some common moulds that you may encounter while mushroom growing and what to do if you see some.

If you're growing a Mushroom Grow Kit purchased from us and it has developed some mould and you require a replacement please send us a message and we'll send you out a fresh replacement kit to get you growing your own mushrooms in no time!

A mushroom grower's enemy #1 - Trichoderma is a genus of fungi which contains over 80 accepted species. Trichoderma mould is usually green in colour, ranging from an olive to emerald green. It is present in all soils and is the most common contaminant found in mushroom growing.

Have you ever found mould on your onions or your bread when the weather gets warm and humid? That's Trichoderma.

It's fast growing and likes temperatures between 25-30 degrees Celcius so you'll more often encounter it in summer and it can take a hold before your mushrooms have had a chance to grow.

Ranges in colour from pale green, olive and dark emerald green. It can also appear yellow and usually has a white leading edge and green centre. 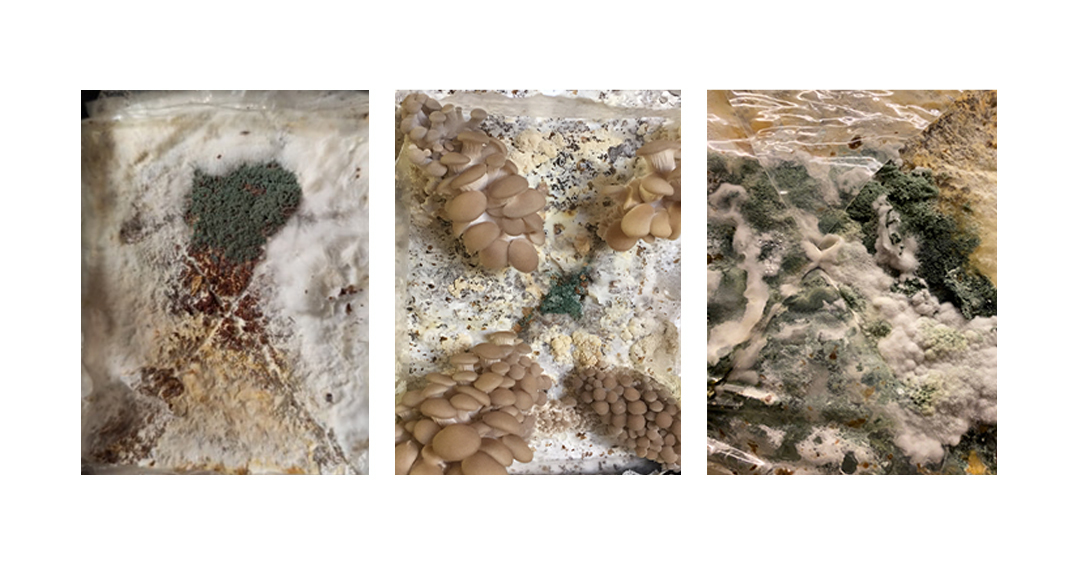 Far left image: A small patch of Trichoderma being surrounded my white mushroom mycelium attempting to contain the spread. This could be removed.

Centre image: A tiny patch of Trichoderma which has developed in the cut area. Mushrooms will grow around it. Spray it or remove the small patch and the mushrooms will finish growing before it spreads further.

Far right image: A large patch of Trichoderma which has taken over the mycelium. Mushrooms won't grow and it's best to abandon this block.

If you encounter Trichoderma mould it if will effect the mushroom's ability to grow the best crop possible but it doesn't mean it will not grow at all.

If it's a small patch but mushrooms are already growing:

If the mould area is only small, smaller than a 50 cent coin for example, the mycelium may contain it itself or you can remove it.

If it's a small patch but mushrooms haven't appeared yet:

If a patch of mould has developed on the surface but no mushrooms have grown yet the  mushrooms will not appear where the mould has formed and may not grow from that side.

If it's mouldy on half or more of the block:

Very rarely you might encounter black mould. This mould can effect people with allergies, asthma or breathing difficulties and you should remove a fruiting block contaminated with black mould immediately from your home.

It is slow growing and thrives in constantly wet environments.

If you are over-watering your mushroom block you might leave it exposed to black mould. 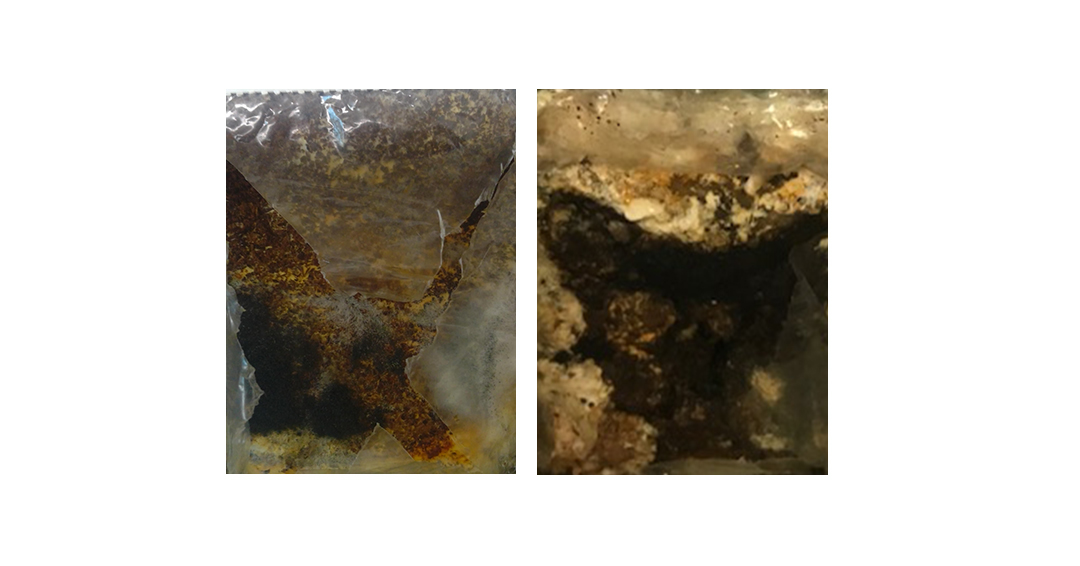 If you encounter any black mould dispose of the mushroom block immediately. Mushrooms will not grow from a block which has become contaminated with black mould.

This mould is extremely common in nature. Due to its ease to grow it has been used for decades in laboratory research into filamentous fungi. Its entire genome has been mapped and it is highly researched.

Unfortunately in mushroom growing circles it's got another name...farm killer. It's speed of growth and proliferation means it can easily overwhelm your mushroom farm and can be hard to eradicate. If you're growing commercially and find this in your farm take immediate action.

It's mainly present in tropical and sub-tropical regions and you might encounter it more in the warmer months when it's hot and humid.

While harmless to people and animals it's extremely fast growing and will overtake the mushroom mycelium and grow very fast.

Orange bread mould is bright neon orange. When it first appears it looks like fine orange wispy-ness which will develop into a bright orange powder-y looking patch. If left to grow it will make round orange lumpy formations. If you see it try to catch it at the wispy stage before it releases spores. 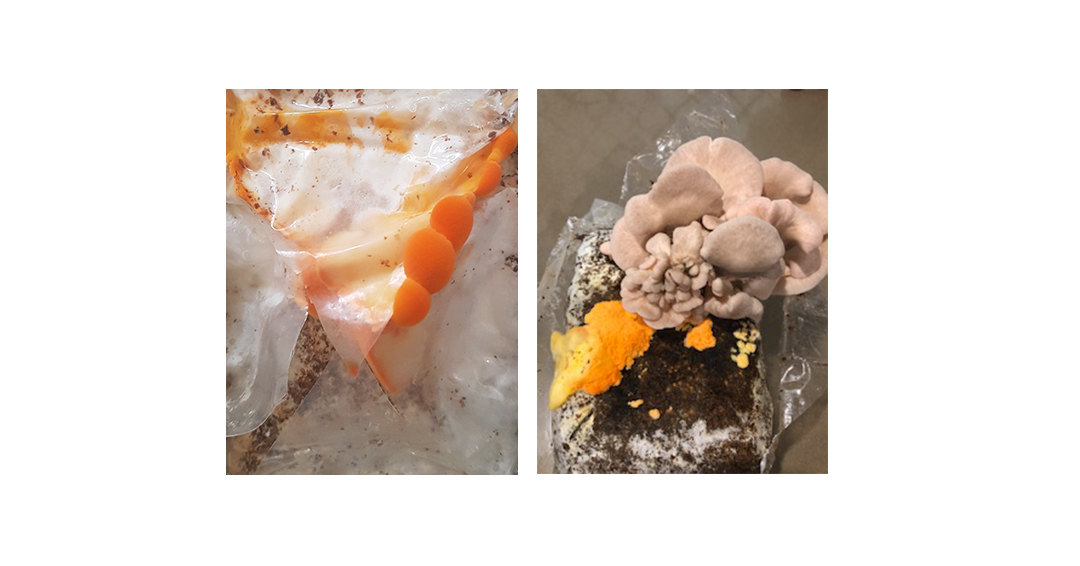 If you encounter any orange bread mould, contain the source by sealing it in a plastic bag and dispose of it immediately.

It can appear and grow in as little as 8-12 hours and, if left unchecked, will take over your mushroom block and spread through the air to other incubating or fruiting mushroom blocks.

Don't disturb the orange bread mould as it will release a fine cloud of orange spores into the air.

Clean down any area that had orange bread mould nearby and look for a source such as coffee grinds, compost or damp untreated wood.

Cobweb mould is a common contaminant in mushroom growing and often occurs in later flushes. You might encounter this mould on a second flush for example.

Like the other moulds, it likes warm, high humidity environments.

Cobweb mould is often found on spoiled fruits and this can be a potential source which can spread to your mushrooms if in the same room. It can also develop on old mushroom stems so it's important to remove any stem butts from your first flush.

Cobweb mould looks like, you guessed it, cobwebs! It's fine a wispy or fluffy and a very light grey. It can be easily confused with mushroom mycelium except for its colour. Mycelium is bright white whereas cobweb mould is more grey. 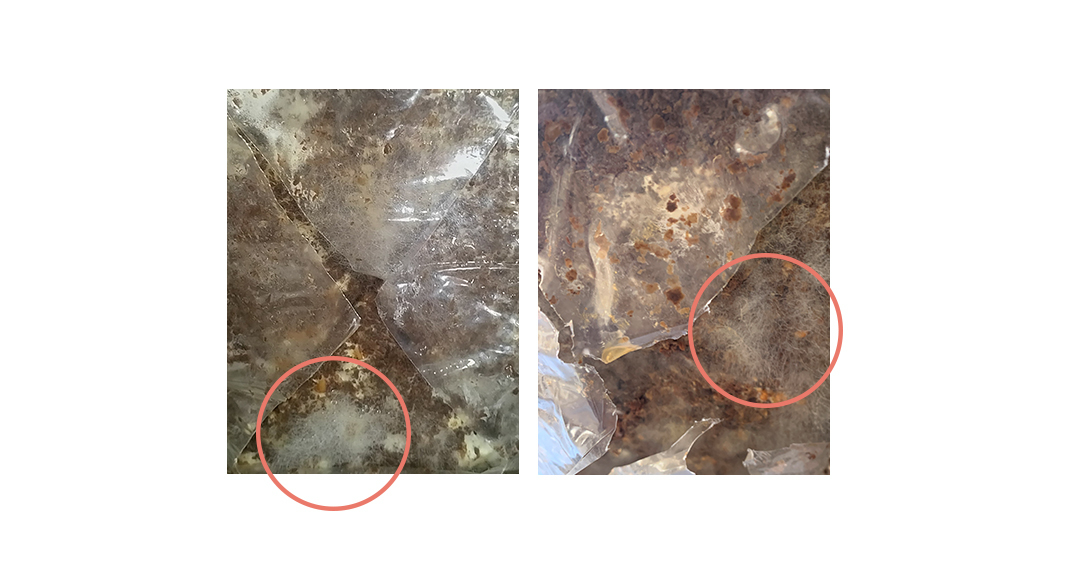 Unfortunately it's more common that you will have to abandon your second flush if cobweb mould takes hold.

Don't eat any mushrooms which are touching cobweb mould.

Pin head mould is one of the most common fungi in the world and you've probably seen it on rotting strawberries. Its a food decomposer and grows mostly in indoor environments. It's usually the first mould to appear on stale bread and also exists in soil and in the air.

Most commonly found in tropical and sub-tropical regions and more prevalent in summer, ideal conditions for this mould are between 25-30 degrees.

This fungi can be carried to your fruiting blocks by fungus gnats or fruit flies which are attracted to the smell of the mycelium and mushrooms.

Pin head mould can be easily confused with Cobweb mould. The way to tell them apart is the tiny black heads on the ends of the mycelium. 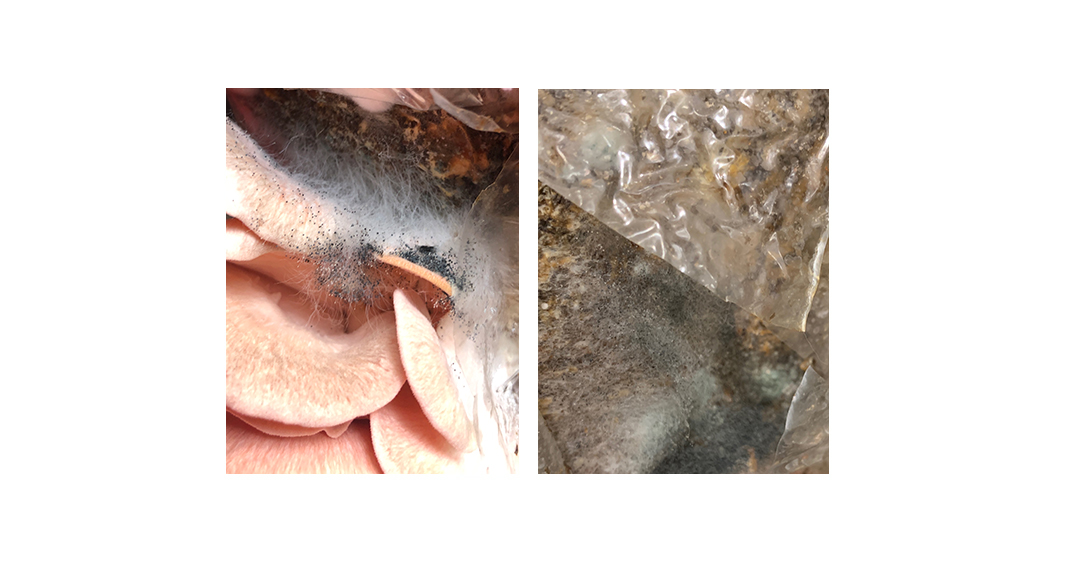 If you see any pin head mould forming around the mushrooms or on the substrate you will have to abandon this fruiting block.

This fungi can be dangerous to people with a weak immune system and cause illness. Don't inhale close to the mould or eat any mushrooms which have grown near this mould.

We hope you don't encounter any of these moulds on your mushroom growing adventures but if you do, don't stress! Fungi is all around us and they play vital roles in the interconnected systems we live in. Admire their ingenuity while you shake your fist at them and try again.

If you're growing a Mushroom Grow Kit purchased from us and it has developed some mould and you require a replacement please send us a message and we'll send you out a fresh replacement kit to get you growing your own mushrooms in no time!

Tags: mould mouldy kit contamination mushrooms not growing
Thank you for leaving a rating!
Did you find this article helpful?

Can't find what you're looking for? Get in touch

How to avoid mould contamination when growing mushrooms For the vast majority of grow kits mould will never be a problem for you but here are a few factors which could increase the chance of mould forming.